Civil Engineering
Structure
Beam
Types of Beam
Different types of Beam and its classification
Before going to the types of the beam, first, you should know What a beam is??

So here is the answer, A beam is a structural element or a member that primarily transfers loads imposed along its axis to its supports such as walls, columns, foundation, etc. and the mode of its deflection is primarily by bending.

Now let us come to our main topic i.e. Types of Beam. There are various types of beams that are classified according to the types of support provided, the loading conditions, the shape of the cross-section, types of material used for its construction, etc.

In this article, we are going to discuss each of the topics mentioned above in detail. 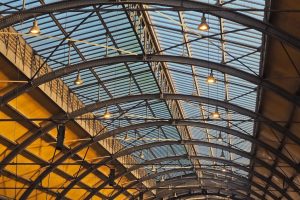 1. According to end supports condition

2. According to the shape of the cross-section

3. According to the equilibrium condition

4. According to the type of material

5. According to the geometry

6. According to the casting condition

This type of beam is supported at both ends consisting of pin support at one of the end and a roller support at the other end. 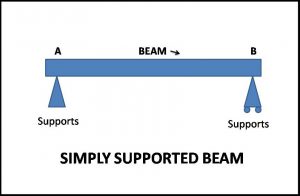 A Cantilever Beam is a type of beam constrained at one end with the other end extending freely outwards. In other words, this beam is supported at one end and the other end is free i.e. it has no support.
Normally, the cantilever is a beam in the form of a rectangular parallelepiped having a length (l), thickness (t), and width (w) or in the form of two beams connected at some angle.
When a load is applied to the beam it transfers that load to the fixed end by bending. 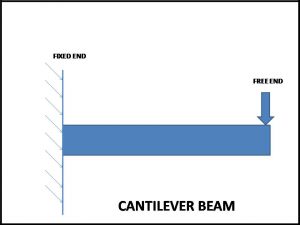 A continuous beam is a type of beam extending over more than two supports distributed throughout its length. 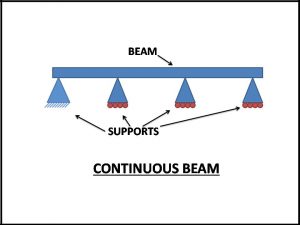 As the name indicates in this beam both the ends are fixed which restrains it from rotating or moving horizontally or vertically at that end. 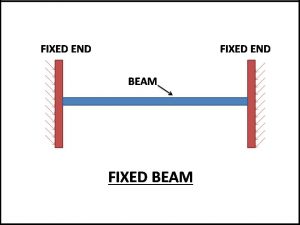 The overhanging beam is a type of beam having its end portion extending beyond its supports. This beam has the properties of both cantilever beam and simply supported beam. The overhanging portion can be at one end or at both the ends of the beam which is called a double overhanging beam. 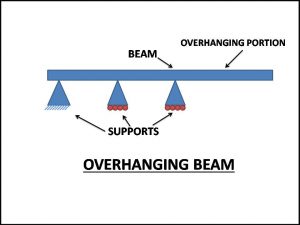